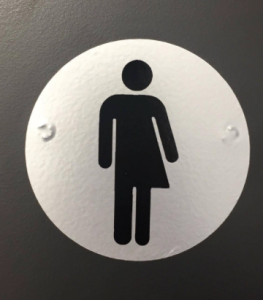 In the last few months, visiting theatres in London for work and pleasure, I’ve noticed the widespread introduction of gender neutral toilets — not (in the ones I have visited) as individual totally private cubicles, nor as necessary additional ‘everyone’ spaces for the comfort and inclusion of trans and non-binary people. But as the only option, for everybody.

It strikes me that this is a reactionary (and lets face it cost-free) move made uncritically, with absolutely no regard for the ways that removing sex segregated toilets by default risks excluding:

– Female (including trans female) victims of male violence who feel vulnerable and/or triggered by the presence of men in their intimate spaces (it also strikes me that removing sex segregated spaces is a particularly weird response to the still-recent #metoo scandal that exposed the endemic sexual abuse faced by women in the entertainment industry, including London theatres).

This is before we even get to the implicit exclusion of anyone (including trans men and women) who for reasons of socialisation, health, bodily privacy etc. want to use a sex segregated toilet facility, which have been a permanent, ubiquitous and (mostly) uncontroversial feature of public space since at least the mid-twentieth century (indeed, the introduction of sex segregated toilets played a role in facilitating the active participation of women in public space, and by extension public life). Are people who work in these theatres aware of how difficult it already is for someone who has never been inside a theatre building before to feel welcome? What is the logic in adding the barrier of another cultural/ideological anomaly to navigate?

Even if you want to argue – as I know many people do (and I am listening) that sexual dimorphism does not exist and that by introducing gender specific spaces you erase the socially constructed binaries that produce sexism — you exclude groups of already marginalised people by failing to provide sex segregated intimate spaces. That is the practical result of pretending we have reached a utopian state in which sexism no longer kills two women in the UK a week, and many more elsewhere. The practical result of implementing change based on convincing ideological arguments that overlook social and historical reality is that you by default exclude already marginalised and vulnerable people.

Perhaps those who’ve made the decision to introduce gender neutral loos might also believe that anyone who feels uncomfortable with them is transphobic and unwelcome in their institution. If these were privately funded buildings, that might be an acceptable (if untrue) argument (although even privately funded institutions should operate within equality and diversity legislation), but surely publicly funded institutions need to make decisions that don’t practically exclude huge numbers of their local, already underrepresented communities, either explicitly or by default from attending events they host? I can’t believe that the boards and trustees of these institutions haven’t thought critically about the potential risks of this for widening participation.

Even more bafflingly, some ‘gender neutral’ toilets are now separated into ‘urinal’ and ‘cubicle’ facilities, so that, in effect, men now have a sex segregated toilet while women (who already do not have adequate provision of public toilets in theatre buildings in particular and public spaces in general, and who are the group at greatest risk of gender-based violence) now have to share their spaces with men who can’t or don’t want to use a urinal.

There are two straightforward solutions to this that I can see, and that have already been implemented in some venues (including the NT and the Barbican):

– reintroduce sex segregated toilets and, at the same time, increase provision by providing gender neutral ‘everyone’ toilets for those happy to share, and for the comfort and inclusion of trans and non binary people (this additionally takes some of the pressure off of already overcrowded women’s toilets)

Either of these options, obviously, requires investment of actual cash to facilitate inclusion across the board – rather than the practically cost-free lip service to inclusion that is the current gender neutral as exclusive option.

It should go without saying (but this is the internet so it probably won’t) that none of my argument is made with the intention infringing the rights of trans and non binary people to feel comfortable and safe in intimate spaces. Everyone has the right to safe spaces free from the fear of harassment and embarrassment — which the exclusive gender neutral solution does not provide.