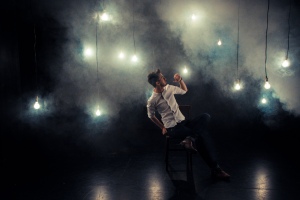 David Shearing’s new work, THE WEATHER MACHINE, premiers in Leeds this weekend. Shearing collaborates with musicians, writers and performers to craft immersive performances. His work is in the tradition of popular companies such as Punchdrunk, Shunt and You Me Bum Bum Train, who create performance landscapes that place audiences at the centre of the action. However, unlike Punchdrunk, whose latest offerings, The Drowned Man in London and Sleep No More in New York, comprised elaborate, highly detailed sets constructed throughout the sprawling expanse of disused buildings, Shearing is concerned with creating gentle, reflective immersive spaces. Spaces that work against what he has called the ’empty spectacle’; of huge scale realist design-scapes.

Shearing layers sound, text and image. His pieces have no live performers; instead the work is designed to encourage audience members to engage deeply with the scenographic elements. Set, lighting, sound and video projection combine to create a nuanced environment in a single studio, where spectators linger for the duration of the performance.

The atmospheric qualities of Shearing’s works are striking. His 2012 performance And it All Comes Down to This…, was developed using psychological models of mindfulness and catharsis. The journey through a landscape of glass jars, where sounds escaped from bird-boxes and haze curled up around deckchairs, on which the audience was placed to hear sections of text, was profoundly moving. It won the 2013 World Stage Design award for Installation Design. 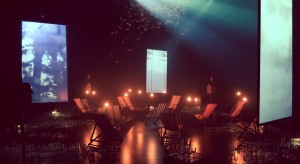 Shearing cites Adolphe Appia’s theories of stage design as especially important to his aesthetic approach. Appiah famously expressed frustration at the superficiality of the realistic set designs of the early twentieth century. Like Appiah, Shearing is not interested in recreating reality. Rather, he fuses forms to evoke sensory and emotional engagement – giving life to Appiah’s assertion that, “we shall no longer try to give the illusion of a forest, but the illusion of a man in the atmosphere of a forest”. 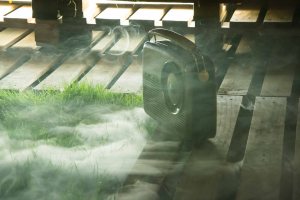 For THE WEATHER MACHINE, Shearing has collaborated with composer James Bulley and writer Kamal Kaan. The performance takes place on a terrain constructed from screens, wooden pallets and grass, in the main studio space of stage@leeds, the University of Leeds public licensed theatre. Shearing uses the weather conditions of the day on which the performance takes place to present a part-improvised work about the ways in which the chance incidents of nature shape human lives. Headphone technology is a recurring feature of Shearing’s work and he employs the technique here – shifting between intimate headphone delivery and external speaker delivery to highlight the separation between the individual and the community.

You can catch THE WEATHER MACHINE this weekend (until 7th Feb) at stage@leeds. David Shearing will also be speaking at a panel on the ‘Scenographic City’, as part of Leeds Ludus Festival on Saturday 7th February. Along with Alan Lane, director of Leeds-based company Slung Low, and the performance collective Invisible Flock, he will discuss the ways that theatre can reimagine and recreate the city space.

You can find out more about these events and book tickets here.